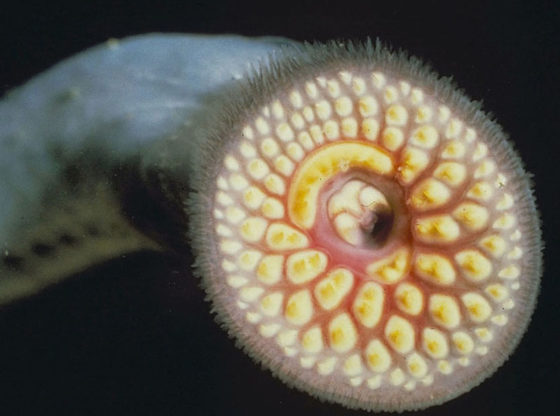 According to the Ohio Department of Natural Resource’s Ohio Field Guide to Aquatic Invasive Species, the sea lamprey is an eel-like fish that feeds through sucking the blood and fluids of other fish. There are native species of lamprey in Ohio (Including other parasitic lamprey.) Though their coloring is similar to other lampreys— “dark tan above and lighter below with many darker speckles or blotches,”– the sea lamprey is larger.

Some of the main control measures for the sea lamprey, according to the Great Lakes Fishery Commission, include  physical barriers, traps, pheromones and alarms. Lampricide, chemicals such as “TFM (for 3-trifluoromethyl-4-nitrophenol) or TFM with an additive known as Bayluscide (niclosamide) ” is also used to kill lamprey larvae.

Preventative measures for lamprey could be considered the use of lampricide. There are also efforts by the Great Lakes Fishery Commission to enact ballast regulations. They also “keep an eye on” aquaculture and recreational transfers.