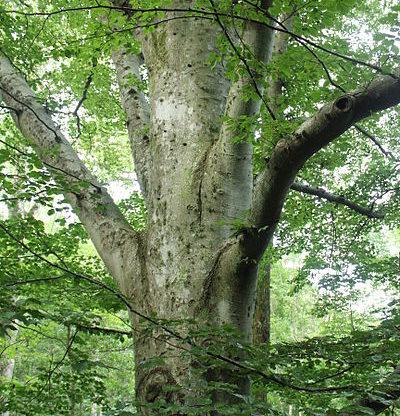 According to the Ohio Department of Natural Resources’ Division of Forestry, Beech Leaf Disease “affects American beech (Fagus grandifolia) and possibly European beech (Fagus sylvatica) and no causal agent has yet been identified.” Symptoms include stripes on leaves, and, later, “heavily shriveled, discolored, deformed leaves clustered near the branch tips as well as reduced leaf and bud production.” Buds are small and weak, and trees can die, particularly saplings.

According to a Lake Metroparks blog post by biologist John Pogacnik, “until we determine a cause, we can’t stop it.”

The ODNR is urging reporting of Beech Leaf Disease to prevent spread. The ODNR is working “ to monitor the spread and document the impact of BLD to help inform research efforts and create management tools.” Landowners are told to report both signs of the disease and healthy Beech trees, as well as to avoid moving Beech trees or parts of Beech trees to prevent the spread.

Beech Leaf Disease, according to the ODNR’s Division of Forestry, can damage and kill Beech trees. It “appears to spread rapidly. Incidence of BLD does not appear to be influenced by slope, aspect, or soil conditions. In established areas, the proportion of American beech showing symptoms has been nearly 100%.”